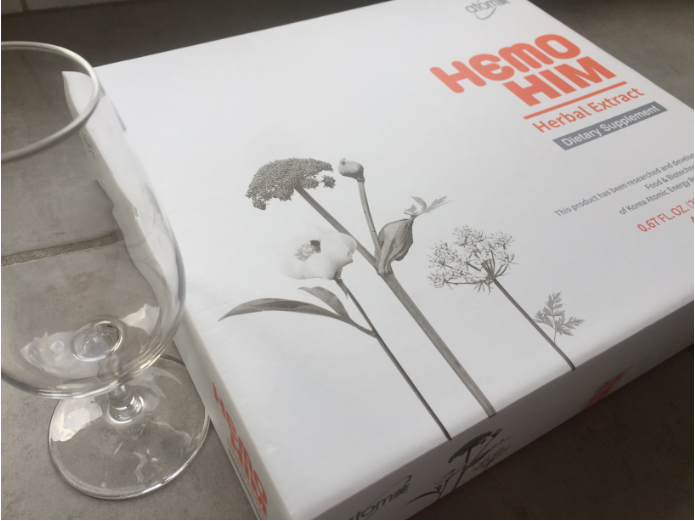 HemoHIM is a herbal supplement made of 100% natural ingredients. It gives you energy, improves the functions of your immune system and strengthen your body’s anti-cancer activity.

Best seller after red giseng, HemoHim is an excellent product, due to the technology used in high purity refining. It provides a precise formula of the purest ingredients in each package.

Patented in the United States, Germany, Italy, France and the United Kingdom, as well as in Korea, haemohim is continually proving its ability to strengthen immunity.

Hemohim is a new substance with a special immune function that has been developed from Angelica sinensis, Chuanxiong and Paeonia lactiflora using bio-engineering and radiation technology. The safety and function has been proven in clinical tests and has been approved by the KFDA as the first ever health food supplement to boost immune system function.

Thanks to the manufacturing technology and its exceptional formulas, Hemohim has several important virtues.

It has been proven to be several times more effective than ginseng products and mushrooms in increasing immune capacity. HemoHIM has been tested against Jin Sam, Hong Sam and Seonsam red ginseng. It has also been tested against the mushroom varieties Eungi and Sanghwang.

Who can consume HemoHim ?

HemoHim is highly recommended for people listed below

Be aware that anyone can use HemoHim. It is not forbidden, on the contrary. This product can be used to prevent illness and stay healthy.

HemoHim’s history: How it was born?

HemoHIM was the name of a government research project conducted by a team of doctoral scientists at the Korea Atomic Energy Research Institute (KAERI).

The South Korean government proposed the project to the team to create a new substance that will radically boost the human immune system. The aim is to protect the nation’s most esteemed scientists at KAERI, who are much more likely to be exposed to radiation than other people.

The team tested more than 1,000 different herbs to create the perfect substance to achieve the project’s goal. It took the team about 8 years to do this, and with a government grant of more than $5 million.

At the end of the project, the Korean government decided to commercialize the supplement and offer it to the general public. The truth is that not only scientists working with atomic energy are affected by radiation, but we are all exposed to radiation in our daily activities such as the use of cell phones! The name of the HemoHIM project then became the name of the substance/product and was offered to the general public.

For 4 consecutive years, HemoHim has been the top selling product in the quranic network marketing industry, courtesy of Korea Fair Trade Commission 2015 ~ 2018.

A high quality organic angelica is the strength of HemoHim

HemoHim’s main ingredient, Angelica radix, is grown in Pyong-chang in Gang-won province of Korea, 800 meters above sea level. It is organically grown to the Good Agricultural Practices Standard implemented by the Korean Ministry of Agriculture and has not been exposed to pesticides or weedkillers during harvest and distribution. Only high quality ingredients, controlled by strict production processes, are used in the HemoHim product

Angelica Radix Mixed Extracts is patented in Korea, USA, Japan and 4 European countries (Germany, UK, France and Italy). HemoHim is now marketed and consumed in 46 different countries around the world.

Atomy HemoHim: an excellent product at an affordable price

For information, the initial number of sachets in a box was 30 when HemoHim was launched on the market. Then the number of packages was increased to 48, then to 54. Today, you have 60 bags packed in a box. On the other hand, its price has remained the same since its launching in the market.

HemoHim: how it is developed?

Hemohim is developed with the work of professionals from differents fields: